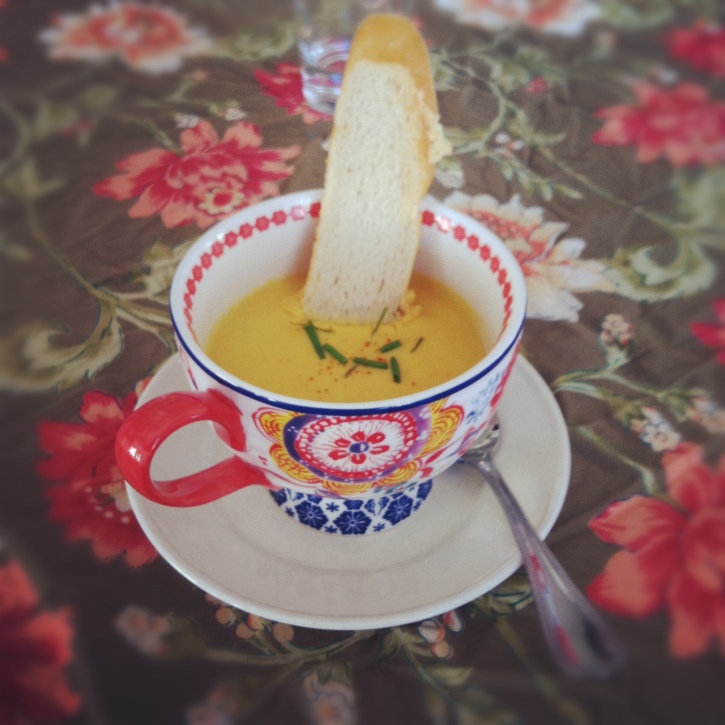 Look, being a momma is not all snuggles and smiles.  There’s spit up, boogies, pee, drool, and poop.  LOTS of poop.  I posted a recipe here for a lovely soup I had while visiting with friends.  Here is what happened behind the scenes.

I was looking forward to seeing both of my friends on a Thursday that I was home with Anderson (how I love my Thursdays home with him!).  I hadn’t slept well the night before.  I was also full of stress.  The following day, my mother was having major surgery.  I was burned out from working long days (December in the publishing industry can be hellish).  I had a screaming headache.  I was also in the middle of making a decision about a major career change.  Calgon take me away, right?

I was sitting on Diane’s kitchen floor with Anderson.  I was saying to Diane, “I need just a few minutes to myself to regroup sometime soon.  A few minutes where I’m not needed.” I was fantasizing about sitting in a coffee shop alone with a book and a latte, you know?  All mommas need a break and yet we tend to feel guilty saying it out loud.  Well, I’m saying it out loud.  Being a full time employee, wife, mom, and all of the other titles is really hard.  Wonderful, but hard.

Anyway, I scooped a second helping of Diane’s soup and asked her if she’d share the recipe for a guest blog post.  Joanna was in the living room with Diane’s daughter and Anderson.   How cute are they? 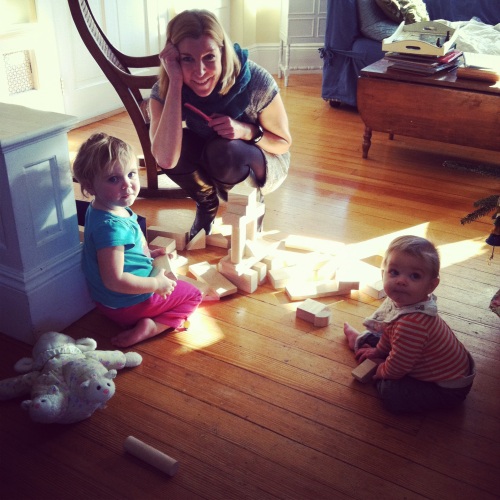 I was snapping a shot of the soup. 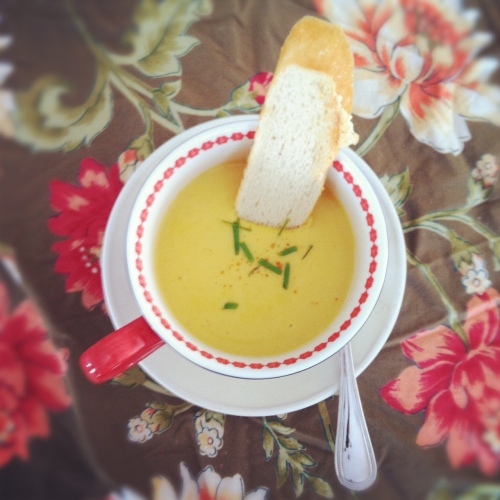 Just then, I looked at Anderson and saw a shadow on the back of his shirt, nearly up to his neck.  Just as I saw it, Diane saw it.  Joanna said, “You know, I thought I smelled something.”  Oh my–a giant poop explosion.  I had never seen an explosion that went more than halfway up his back before.  Okay, maybe once while we were visiting my parents’ church…and that is an entirely other hysterical story.  So, this was the second time.

I brought him to Diane’s changing table (thank goodness she still has one).  I literally didn’t know how to deal with the poop without making a gigantic mess out of her table.  It was impossible.  The moment I got the diaper off, there was poop oozing out.  It was on the table, on his legs, on his belly, on my hands, on my arms, on my face from where I pulled the hair out of my eye — everywhere.  I considered cutting the shirt off of him to avoid having to pull it over his head, but decided that was probably unsafe, so I stretched it to pull it down instead of up.  Meanwhile, he was wiggling.

I finally decided that wipes were a joke and picked him up to put him in her tub.  Yes, I picked him up.  Now, I’ve got poop on the front of me.  I turned the water on and, like any bathtub, it takes a moment for the warm water to come on.  I couldn’t figure out how to get the water to drain from the tub, so it was just filling with cold water.  When it turned warm, I thought, “No problem, I will just stick his lower half under the faucet.”

Are you laughing yet?

Well, I couldn’t reach that far, so I started to take my pants off to avoid getting them wet.  Try unzipping boots and pulling socks and pants off while holding a squirmy, poop-covered infant.  Needless to say, my pants were off and I stepped into her tub to get him to the faucet.  When I squatted a bit, bam.  Poop on my legs, now, too.  I literally looked at him, the faucet, the tub, and I realized I had no idea what to do.  I froze.  Then, I yelled to Diane and Joanna (who had no idea this was all going on), “Hey guys, calling in for back-up!”

Then I burst into tears.

Diane came around the corner and there I was with a poopy baby, in my underwear, standing in her tub, crying.

It was a very real mom moment.  Poor Anderson took the whole thing like a champ and now I laugh about this story!

By the way, if you want the soup recipe (it is really good), you can find it here. Hopefully you won’t associate it with baby poop.

Hello! I’m Cara and this blog serves as my outlet to share garden adventures, veggie recipes, and general things in life that I’m passionate about like family and nature. My career is in publishing, but I have a camera with me always and dream of someday calling a veggie farm my own. Thanks for stopping by.